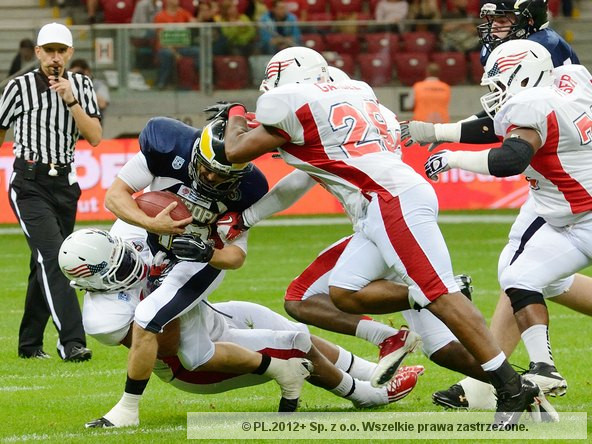 More than 25,000 enthusiastic football fans, a pre-game picnic entertainment zone, a family atmosphere and the unforgettable emotions of the sport – all this and more marked the first Euro-American Challenge, a historic game between Europe and America, on Saturday at the National Stadium in Warsaw. Former Polish President Lech Wałęsa was the honorary guest at the event, inaugurating the match with a symbolic toss of the coin, and Poles showed that they have a place for American football in their hearts.

All-star teams from two continents clashed in this one-of-a-kind American football contest, with the American team coming out ahead 34-7 at the end of the day. The defeat prompted European players to proclaim that they would 'take advantage of the chance to beat the Americans next year', just as President Wałęsa predicted would happen this year during a ceremonial speech to open the game. The big crowd of spectators in attendance at the stadium and thousands more watching the broadcast on TVP Sport provided further evidence of the football fever that is gripping Poland. On September 1, 2012, Warsaw truly became the European capital of American football.

‘This match is a fabulous reward for our hard work with the Warsaw Eagles on the popularization of American football in Poland. It is also a huge motivation for the future. I know it was worth it. There were thousands of people with families at the stadium. I saw in their eyes the same positive emotions which this sport filled me with several years ago. I hope that we will be meeting with all fans in larger and larger groups on a yearly basis and at league matches of the Warsaw Eagles’, summed up Paul Kuśmierz, organizer of the Euro-American Challenge and Warsaw Eagles team owner.

The seats of the National Stadium were filled not only by fans, but also by talent-seeking coaches and scouts from both Europe and the United States, providing greater motivation for the players on both sides to perform at their best. The European team, led by coach Kirk Heidelber, was represented by players from 10 countries, including more than 20 players from Poland. The American team was led to victory by coach George St. Lawrence.

‘It was an excellent match, and I feel honoured that I could take part in it. I played on a small college team in the USA and I have never had an opportunity to play at such a wonderful stadium in front of such a large audience. It was a great experience’, said Clarence Anderson, who was named the game's MVP.

Saturday's game was not merely a giant sporting event, as the organizers prepared numerous additional attractions. Stadium gates opened at 1:00 PM so that families could enjoy themselves in the picnic entertainment zone, full of games and competitions suited even for the youngest fans. Patrycja Kazadi, Paula Marciniak and Piotr ‘Dymek’ Dymała all played concerts before the main festivities began. The pre-game fun continued inside the stadium itself, with a dance show by the Warsaw Eagles Bell-Arto cheerleaders and a spectacular introduction of the teams.

‘We came for the match with our entire family. It was our first, but definitely not last, time. It is a fantastic way of spending time with my husband and children. I think that after a few more matches I will fully understand the rules of the game’, said Justyna Szczepańska, a new American football fan, in sharing her experience.